The Club’s aim is to provide a playing environment which is friendly, competitive and enjoyed by all. This list, which is by no means exhaustive, is a guide to good conduct on the green.

Remember bowling is a friendly game and all players should show courtesy and good sportsmanship. Shake hands before a match and at its conclusion. Be gracious whether you win or lose and compliment your opponent on a good shot.

Never criticise your opponents, the green or your

own team. If you cannot say something positive say nothing.

Encourage and praise the rest of your team. Bowls is a team game and everyone should be working together.

Don’t applaud a team member who has outrageous luck and admit a fluke with grace. Refrain from talking opponent’s woods out of the head or ill-wishing an opponent’s bowl (think it if you must, but never say it out loud).

Avoid dropping bowls onto the green – this can damage the playing surface.

start ‘breaking up the head’ until the score for the end has been agreed.

Remember it’s only one person’s job to agree the score with his or her opposite number – rest of the team should stand well back.

Firing! – if you are about to deliver a ‘heavy’ wood, please ensure that the teams at the head on both your rink and adjacent rinks are aware so that they can take appropriate action to prevent injury to themselves and/or damage to the heads on on other rinks. 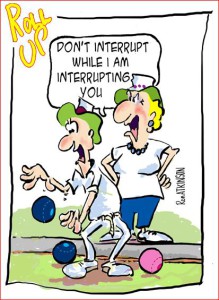 At the mat end, when not occupying the mat, players should stand at least a metre behind the mat, being careful not to distract the player about to bowl, by moving about or talking. When you have delivered your bowl and it has come to rest the possession of the mat passes to your opponent, so move away quickly.

When you are behind the head, stand still and do not stand where you obscure the boundary or rink markers.

When changing ends, players should walk quickly down the centre of the rink (but don’t run). In a league game, skips should leave the head together and, to avoid interfering with play on an adjacent rink, should not stop and speak to their teams half way down the rink.

Please do not walk behind a rink (i.e. on the Green’s external surrounds) when a bowler on that rink is about to bowl.

Mobile Phones must be switched off if taken on the green or surrounds.

Eating, drinking or carrying drinks on the green or surrounds is not allowed.

Footwear – Only bowling shoes may be worn on the green. Do not wear bowling shoes anywhere outside the Club – they could transfer dirt or grit on to the bowling surface when returning to the green.

Learn the Rules of the Sport of Indoor Bowls and Club Bye-Laws and observe them.

Using foul and or abusive language on the green is contrary to the laws and spirit of the game. Please remember good etiquette and manners make for a pleasant game and cost nothing.   If someone else makes a mistake, don’t react badly – have a quiet word politely!

Allegations of misconduct on the green should be made in writing to the Bowling Committee who will consider if there is a case for a member to answer. The Committee will make known its findings to the relevant parties and if necessary include these in the minutes of the meeting.